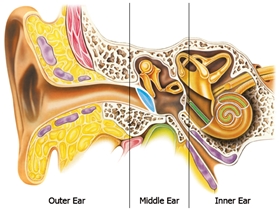 The ear consists of three parts: the outer ear, middle ear and inner ear. The outer ear is the visible part of the ear on either side of the head and includes the ear canals that go into the head. The fleshy parts of the outer ear act as "collectors" of sound waves, which then travel down the ear canal to the eardrum. This is a membrane of tissue that separates the outer ear from the middle ear.

The sound waves cause the eardrum to vibrate. This vibration is passed on to the middle ear, which consists of three small bones called the "ossicles", which amplify and conduct the vibrations of the eardrum to the inner ear.

The inner ear consists of an organ called the cochlea, which is shaped like a snail's shell. The cochlea contains tiny cells called hair cells which move in response to the vibrations passed from the ossicles. The movement of these hair cells generates an electrical signal that is transmitted to the brain through the auditory nerve.

This type of hearing loss occurs when sound is not conducted efficiently through the outer ear canal to the eardrum and from eardrum to the tiny bones called ossicles and from the ossicles to the inner ear. This type of hearing loss usually involves a reduction in sound level alongwith the ability to hear faint sounds. It can often be medically or surgically treated.